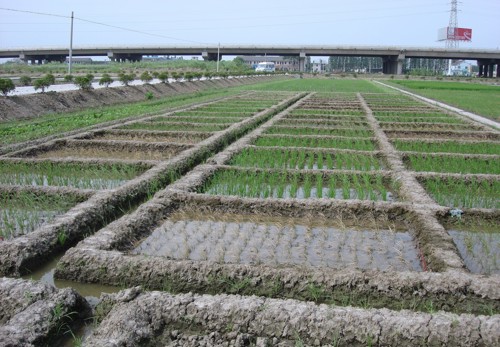 The Existing Substances Risk Assessment of Nickel was completed in 2008. The straightforward explanation of the goal of this exercise was to determine if the ongoing production and use of nickel in the European Union (EU) causes risks to humans or the environment. The European Union launched the Existing Substances regulation in 2001 to comply with Council Regulation (EEC) 793/93. “Existing” substances were defined as chemical substances in use within the European Community before September 1981 and listed in the European Inventory of Existing Commercial Chemical Substances. Council Regulation (EEC) 793/931 provides a systematic framework for the evaluation of the risks of existing substances to human health and the environment.

The conceptual approach to conducting the environment section of the EU Risk Assessment of Nickel included the following steps (Figure 1):

The EU Risk Assessments for Nickel and Nickel Compounds were developed over the period from 2002 to 2008. The Danish Environmental Protection Agency (DEPA) acted as the Rapporteur in this process, in close collaboration with the international nickel industry. EU Risk Assessment Reports (RARs) for the environment for nickel substances (metallic nickel, nickel carbonate, nickel chloride, nickel nitrate, and nickel sulfate) were submitted in the spring of 2008 after thorough review by the Technical Committee on New and Existing Substances (TCNES), which was comprised of technical representatives from the EU Member States. A final peer review was provided by the Scientific Committee on Health and Environmental Risks (SCHER) (see Section 5 in this fact sheet). The European Commission’s Institute for Health and Consumer Protection published the final Risk Assessment Reports for nickel and nickel compounds in November 2009.

After the EU RARs received approval within Europe, the data sets were discussed at the international level within the Organization of Economic Cooperation and Development (OECD). The nickel ecotoxicity data sets used in the EU RARs were accepted at the OECD’s SIDS (Screening Level Information Data Set) Initial Assessment Meeting (SIAM 28, October 2008), as was the use of nickel bioavailability models to normalize the nickel ecotoxicity data. 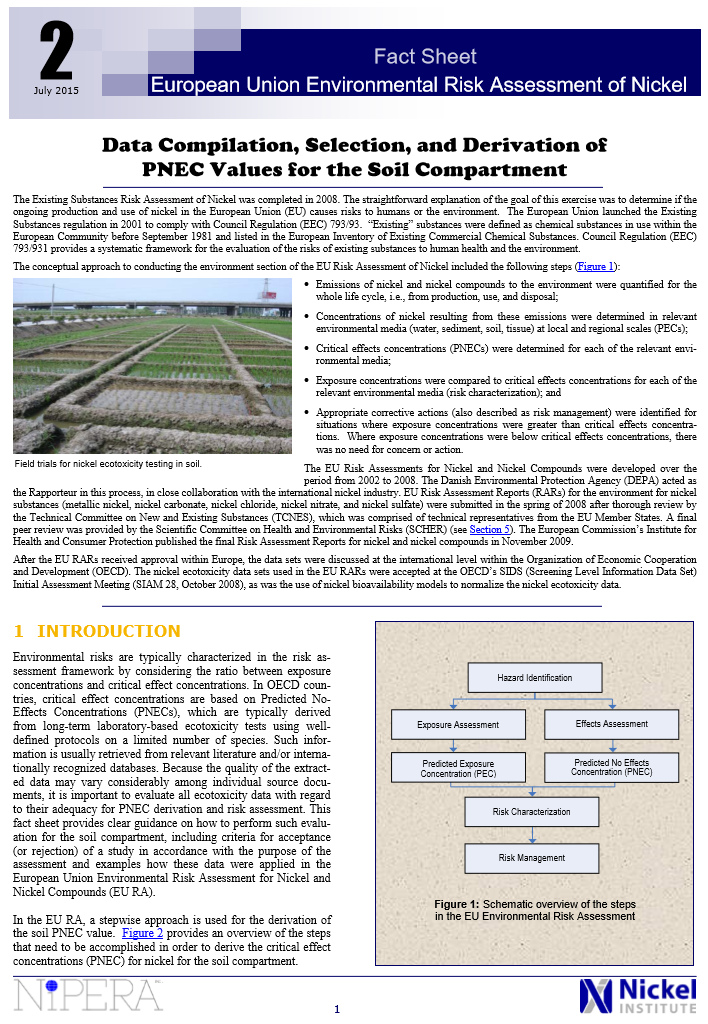 Environmental risks are typically characterized in the risk assessment framework by considering the ratio between exposure concentrations and critical effect concentrations. In OECD countries, critical effect concentrations are based on Predicted No-Effects Concentrations (PNECs), which are typically derived from long-term laboratory-based ecotoxicity tests using well-defined protocols on a limited number of species. Such information is usually retrieved from relevant literature and/or internationally recognized databases. Because the quality of the extracted data may vary considerably among individual source documents, it is important to evaluate all ecotoxicity data with regard to their adequacy for PNEC derivation and risk assessment. This fact sheet provides clear guidance on how to perform such evaluation for the soil compartment, including criteria for acceptance (or rejection) of a study in accordance with the purpose of the assessment and examples how these data were applied in the European Union Environmental Risk Assessment for Nickel and Nickel Compounds (EU RA).

In the EU RA, a stepwise approach is used for the derivation of the soil PNEC value. Figure 2 provides an overview of the steps that need to be accomplished in order to derive the critical effect concentrations (PNEC) for nickel for the soil compartment.

The data on the toxicity of nickel to soil organisms were compiled from three main sources: open literature, internationally recognized databases (e.g., Science Direct, Web of Science), and industry-sponsored research programs. A large dataset on the ecotoxicity of nickel to soil organisms was compiled. All gathered data were further screened using the criteria as outlined in Section 2.2.

Only the identified ecotoxicity data fulfilling the above mentioned criteria were used for the soil PNEC derivation.

When considering the bioavailability of nickel in soils, different factors are important in determining the ecotoxicity of nickel to soil organisms:

For further guidance, see Fact Sheet 5 on bioavailability models for the soil compartment.

Aged and/or normalized high quality ecotoxicity data are grouped/aggregated in order to avoid over representation of ecotoxicological data from one particular species/process. The following major rules were used to aggregate data:

After the data aggregation step, only one ecotoxicity value (i.e., the geometric mean for the most sensitive endpoint) was assigned to a particular species.

Estimation of the HC5 from the species sensitivity distribution

When a large data set for different taxonomic groups is available, the PNEC can be calculated using a statistical extrapolation method. In this approach, the ecotoxicity data were ranked from low (most sensitive species/process) to high (least sensitive species/process). A species sensitivity distribution (SSD) was then constructed by applying an appropriate curve fitting distribution, usually a log-normal distribution, to the (aged and normalized) high quality aggregated chronic toxicity data (Aldenberg & Jaworska, 2000). From the SSD, a 5th percentile value (at the median confidence interval) is calculated (i.e., median HC5) using the software program ETx as described by Van Vlaardingen et al. (2004).

Selection of appropriate assessment factor and derivation of the PNEC

To account for uncertainty, an assessment factor (AF) may be applied to the median HC5. In general, such AFs vary between 1 and 5 and are determined on a case-by-case basis. The soil PNEC would therefore be calculated as follows:

Based on the available chronic NOEC/L(E)C10 data, the following points were considered when determining the AF:

In the Nickel EU RA, no mesocosm/field data were available that allowed the determination of threshold concentrations of nickel in soils under field conditions. In addition, increased uncertainty was attributed to the limited number of species and life-strategies for which the bioavailability models have been developed and validated. All other identified criteria were fulfilled. Therefore, based on the weight of evidence, the Danish Rapporteur proposed to use an AF of 2.

i  The application of the quality screening criteria would also apply in case additional or new ecotoxicity data would be considered.

The quality screening criteria as defined in Section 2.2 were applied to select the high quality chronic ecotoxicity data of nickel to soil organisms.

In this example, the data were normalized to the physico-chemical conditions prevailing in the Danish soils using the ageing and bioavailability models as explained in Fact Sheet 5.

The selected normalized individual high quality chronic ecotoxicity data of nickel to soil organisms are aggregated according to the criteria mentioned in Section 2.5. An overview of the aged normalized (to the conditions prevailing in the Danish soils) species mean NOEC/L(E)C10 values for the most sensi-tive endpoint is provided in Table 2.

The species mean NOEC/L(E)C10 values in Table 2 were further ranked from low to high. Subsequently, a log-normal distribution was fitted through the ranked species mean toxicity data. From this SSD the median 5th percentile was calculated using the ETx model. The SSD and the median HC5 value for the normalized ecotoxicity data to the physico-chemical conditions prevailing in the soils in Denmark are presented in Figure 3.

The example of the SSD construction and PNEC derivation for nickel, as shown above, only applies for the soil chemistry prevailing in the Danish soils. However, other soil chemistries are encountered in the EU soils resulting, therefore, in the setting of different PNEC values for Ni. These different eco-regions, as shown in Table 3, have been selected in the EU Risk Assessment to provide examples of typical conditions covering a wide range of physico-chemical conditions (pH between 3.0 and 7.5, CEC between 2.4 and 36 cmol/kg, clay between 7 and 46%) occurring in EU soils. Therefore, PNEC values for typical eco-regions in EU soils vary, depending on the soil chemistry, between 4.3 and 96.2 mg Ni/kg. The soil chemistry and median HC5/PNEC values calculated for the different selected eco-regions in EU soils are summarized in Table 3.

4 CONCLUSIONS AND NEXT STEPS IN RISK ASSESSMENT

This fact sheet presents the approach for data gathering, data selection, and data aggregation to be used for derivation of the PNEC value for the soil environment based on the SSD. Because the ecotoxicity of nickel is mitigated by the long-term reactions with the soil (i.e., ageing) and the physico-chemistry of the soils (i.e., pH, clay content, organic matter content), it is highly recommended to age and normalize the ecotoxicity data for PNEC derivation using the available bioavailability models as described in Fact Sheet 5.

The final report on the Environmental Risk assessment of Nickel and Nickel Compounds can be retrieved from the following website:

The opinion of the SCHER can be found at the following address:
http://ec.europa.eu/health/ph_risk/committees/04_scher/docs/scher_o_112.pdf
(last accessed July 2015)